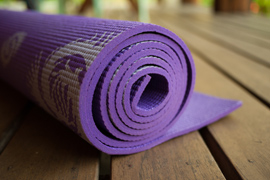 As a yoga teacher in London I am seeing more and more cyclists are turning to yoga to tackle issues originated from cycling postures.

Cycling places pressure on the upper back, the neck and the wrists, the hip flexors become tight from repetitive pedalling as do the hamstrings, which are never fully lengthened in the riding position.

Yoga can help with all these imbalances by systematically lengthening tight spots, opening up the front of the body while gentle extension (back bending) feels fantastic after the spine has been held in a curved position.

One of my yoga students, who is an avid cyclist, experienced injuries over the years while training but since beginning our yoga for cyclists programme he has noticed more flexibility and is now much less injury prone.

Regular yoga practice can bring your cycling to a higher level thanks to improved core strength, focus, balance and breathing efficiency.

The attention to breath and mind-body connection in yoga can also be employed by cyclists while riding to maintain mental clarity and calmness.

We provide 121 private yoga for cyclists in Earlsfield, Wimbledon, Southfields, Wandsworth and Putney.

Our 121 yoga for cycling benefits everyone from recreational cyclists to those who compete in road racing and triathlons.

Contact us at info@121personaltraining.com to book in your trial 121 yoga lesson today!