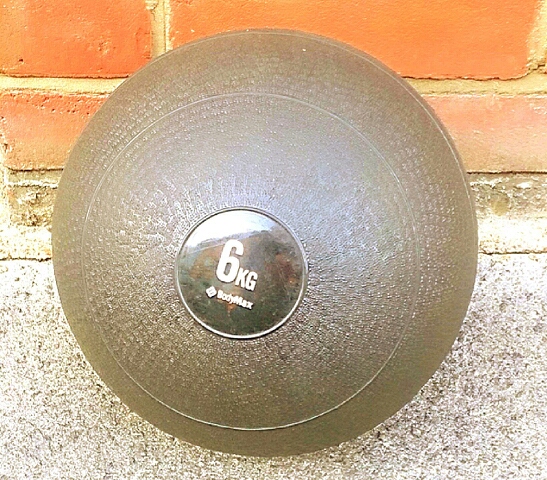 Slam balls are medicine balls with a difference.

Unlike traditional medicine balls, slam balls are soft to the touch, and so can be thrown or ‘slammed’ without damaging walls or floors.

The soft nature of the sand-filled slam ball also means there is no danger of it bouncing or ricocheting into furniture, making it suitable for indoor training.

However, slam ball exercises are generally best performed as part of an outdoor personal training session, where enough space is available so that the ball can be thrown for distance as well as for power.

Just watch out for miniture poodles and little old ladies before you start hurling the slam ball around your local park!

Slam ball exercises are a great way to build strength endurance, as they involve multiple movements performed at high intensity.

They are also a great way to boost metabolism, burn fat and reduce adrenal stress levels.

Slam ball exercises are either performed at rapid pace for periods of 30-60 seconds, or with short active rests between slams for periods of 45-90 seconds.

Both methods are good ways to train the lactic acid system, and to create an oxygen debt, which your body will spend a day or two trying to repay by burning fat and building new muscle.

The explosive nature of slam ball exercises means they are often used by athletes to increase punching, swinging and throwing power.

Start with three sets of three different exercises with 60-90 seconds rest between rounds.

Over time build it up to three sets of six different exercises.

Cut the rest periods down week by week and/or increase the weight of the slam ball to progress longer term.

Hold the slam ball behind your head with your arms bent.

Keep your elbows still and extend your arms (similar to a tricep extension) and throw the ball forwards.

Jog after your throw, pick up the ball and repeat the throw back towards your original start position.

The short jog gives you a few seconds of active rest between throws.

Aim for maximum distance on each throw and work each round for 60-90 seconds.

Hold the slam ball high above your head with your arms slightly bent.

Slam the ball down into the floor as if you were trying to throw a rock through some thick ice.

Pick up the ball as quickly as possible and repeat this floor slam as many times as possible for 30-60 seconds.

Try to use some momentum in this movement, using your legs, core and shoulders to raise the ball back into position above your head.

This is the movement that strongmen (and strongwomen) competitors use to throw heavy barrels during contests.

It’s an exercise which develops explosive power through the posterior chain (hamstrings, glutes and back).

Hold the slam ball between your legs, keeping your elbows and knees slightly bent.

Swing the ball back through your legs and then swing it forward (similar to a double handed kettlebell swing) and throw it behind you over your own head – make sure the immediate area behind you is clear!

Jog after the ball and pick it up.

Spin round and repeat the movement in the opposite direction.

Aim for maximum distance on each throw and work each round for 60-90 seconds.

Take a wide stance and lean forward (similar to the start position for a bent over row) holding the slam ball with both hands up to your chest.

Look down and slam the ball down into the floor, using a chest pressing motion, similar to how a basketball player makes a double handed pass (but with maximum force every time).

Pick up the ball as quickly as possible and repeat this floor slam as many times as possible for 30-60 seconds.

Don’t use any body momentum during this slam – try to keep the tension on the pressing muscles in the chest, front shoulders and triceps.

There are numerous other slam ball exercises including wall slams, shot putt presses, underhand throws and twisting side throws, but these four should be enough to get you started.