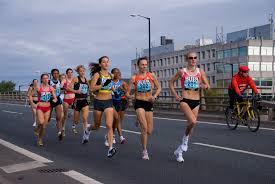 As a personal trainer, I’m often asked if it’s worth taking up a sport once you reach your forties or fifties.

People often think that once they reach what is generally known as ‘middle age’, that they are too old to take up a sporting activity.

That’s nonsense – even if you’ve never been involved in sports, it’s never too late to get started, particularly at a recreational or ‘fun’ level.

You might never make the Olympics, but there’s absolutely no reason that you can’t get yourself fitter and healthier than you were a year ago, five years ago, or even a decade ago.

Then check out our list of inspirational older athletes who seem to manage to hold back the hands of time pretty well.

Kim Collins recently became the first man over 40 to run 100m in under ten seconds, clocking an awesome 9.93 seconds.

A sub ten second 100m is a phenomenal achievement for any man, let alone a forty year old!

As a twenty-something, Collins was fast enough to win the 100m world championships in 2003, yet is now running even faster in his forties than he was in his twenties or thirties.

At the recent Rio Olympics, Jo Pavey competed in the 10,000m, ‘only’ finishing fifteenth, but setting a new over 40s world record in the process.

It wasn’t that much of a shock though, as Jo became European 10,000m champion at the age of 40, and has also run a sub 70 minute half marathon as a forty-something!

Jo is the only British track athlete to have competed at five Olympics, and still competes with – and beats- athletes ten and even twenty years her junior.

In October, at the ripe old age of 46, Dan Henderson will challenge Michael Bisping for the UFC championship.

Mixed martial arts is one of the toughest of all sports, and it’s a tremendous achievement for a man in his mid forties to still be competing in such a sport at the highest level.

Henderson has fought and beaten some true legends of MMA in his twenty year career, including Fedor Emelianenko, Wanderlei Silva and Vitor Belfort, but still being able to fight for a world title at 46 is perhaps his greatest accomplishment of all.

Miura is the world’s oldest professional footballer, and plays in the Japanese second division at the grand old age of 48.

Football is an unforgiving sport on the ankle, knee and hip joints, yet Miura has enjoyed a thirty year career at the highest level, since making his debut for Santos in 1986.

To play for over three decades in a sport which isn’t known for it’s sentimentality, is quite incredible.

Miura has just signed a new contract, so perhaps he will be the man to emulate the late, great Stanley Matthews, and play professional football past his fiftieth birthday.

See – it is possible to be at the top of your game as an older athlete!

We also train plenty of couples – check out our 2 for 1 deals on personal training and private yoga lessons.